One of Oregon’s most beautiful scenic byways has a narrow window in which you can enjoy it. McKenzie Highway 242 runs over the McKenzie Pass from Belknap Springs to Sisters, and throughout most of the year it is generally covered with snow. But in late summer and fall every twisty mile of the narrow, 34-mile-long two-lane road is open to traffic. The road is so curvy in some paces that vehicles longer than 35 feet can’t use it, and pulling trailers on the road is not recommended.

Highway 242 curves and climbs its way through the Willamette National Forest, then opens onto a strange and ancient landscape of lava flows. The Dee Wright Observatory sits alongside the road at the pass’s summit (5,325 feet of elevation), in the middle of a 65-square-mile swath of lava rocks, right where the Deschutes National Forest begins. Even on sunny days, it can still be very chilly and windy at the top. The observatory tower was built by the Civilian Conservation Corps under the supervision of foreman Dee Wright, who died before its completion in 1935. The observatory offers stunning views of Cascade Range peaks in every direction, including the iconic Black Butte, Belknap Crater, Mt. Washington, Mt. Jefferson, Mt. Hood (in fair weather), and the North and Middle Sisters. 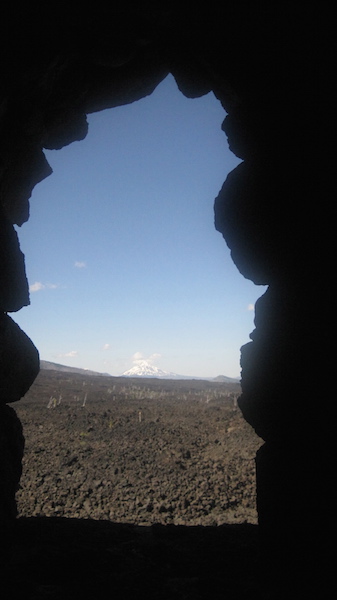 Views through a lava tube on the trail to Little Belknap Crater show nearby Cascade Range mountains.

Early in 2011, the road was added to the National Register of Historic Places. The route closely follows an ancient Native American trail that skirted the lava flows. In 1862, Felix Scott (namesake of the nearby Scott Lake and Scott Mountain) and a crew of 50 men traversed the trail to bring supplies to gold miners in Idaho. This route was bone-jarringly rough for wagon trains, however, and an easier route was identified in 1866, tracing the approximate location of today’s highway. It became a free county road in 1898, and a state highway in 1917. Portions of Scott’s old road are still maintained and used by hikers and horse riders. 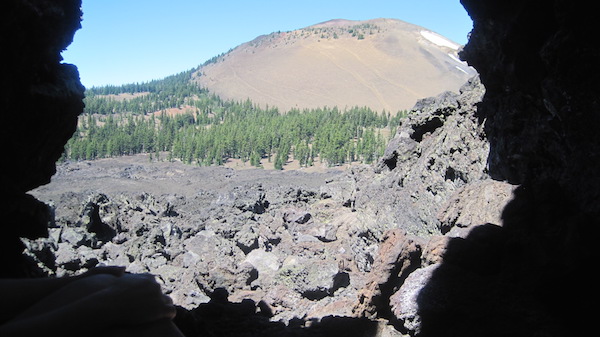 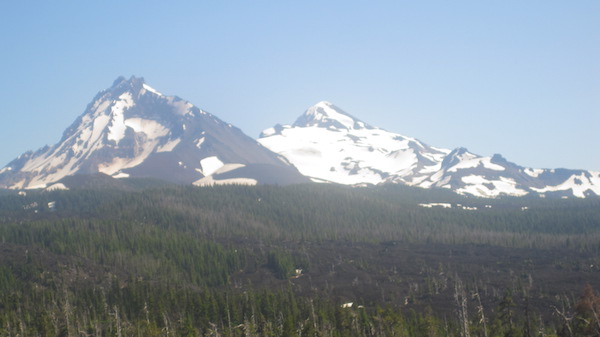 The Cascade Range peaks are close by. Here are the North and Middle Sisters as seen from the summit of McKenzie Pass.

The area is rich in history. Human habitation began 12,000 years ago. A historical marker near the observatory marks a more recent event: Pioneer mailman John Templeton Craig lived near the summit of the pass. Craig carried mail from McKenzie Bridge to Camp Polk, near Sisters. However, in December 1877, a sudden storm prevented Craig from delivering the Christmas mail, and he was found frozen to death inside his cabin. 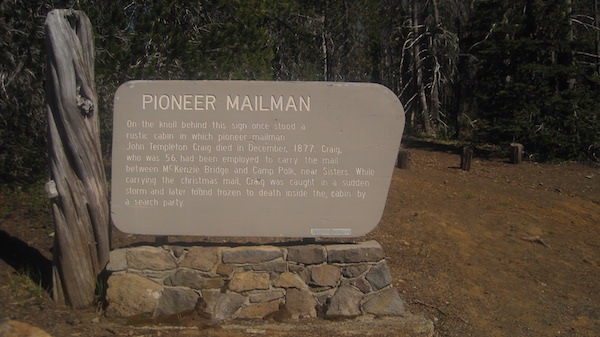 The Pioneer Mailman historical marker tells the tale of John Templeton Craig who delivered mail across the pass.

Highway 242 begins at the junction with OR 126 near the town of McKenzie Bridge, and ends at the junction with U.S. Highway 20 and OR 126 at Sisters. The entire highway can be driven in just a couple of hours. For a little longer of a drive, complete the 82-mile loop that connects 242 with OR 126. The road closes to traffic sometime in mid-to-late October. In June, the approximately 30-foot tall snowdrifts give way to patches of icy snow. By mid to late June, one lane is usually cleared to allow pedestrians and bicyclists a change to enjoy the road before it opens fully to car traffic. 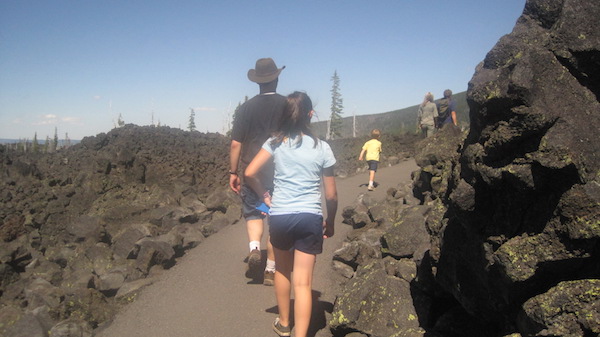 The family making their way to the top of the Dee Wright Observatory.

Whether you plan to drive the whole loop or just part of it, make the Dee Wright Observatory a stop on your trip. The half-mile-long Lava River Trail begins at the observatory—the rubble-strewn landscape is inhospitable to trees, so there is no shade, but the paved path is easy to follow for a 30-minute walk through the lava beds, with interpretive panels along the way. While walking, you can explore lava gutters, small lava tubes, and other features of this unique corner of Oregon. 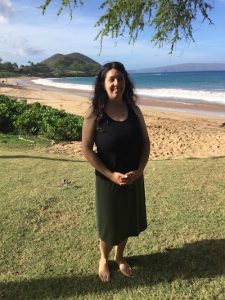 Vanessa Salvia is a long-time freelance writer and editor. Read her journalistic work at vanessasalvia.com and learn more about her editing and content creation services at sagemediaandmarketing.com.

Highway 242 is a secondary, scenic road — not a main travel corridor. Weather conditions, logistics and cost make it impractical to maintain for travel year around. Therefore, the road is closed mid-November to mid-June. When closed, the road is not maintained and accessing it is done at your own risk. Highway 242 typically re-opens by the third Monday in June, barring any work delays and weather conditions. There is no official "just-cycling" access.

The Oregon Department of Transportation (ODOT) clears this route as part of seasonal road maintenance designed for all access in late June. Road clearing is not done for the purpose of car-free cycling. Work includes promoting snowmelt with blowing and plowing for maintenance access, clearing rocks and debris, cutting trees, fixing potholes and repairing the road surface. Often there is only one narrow lane cleared through the snow as needed for work crews. ODOT posts signs and closes gates to support the closure for safety, and increase understanding that there are crews working on the road. Please do not put yourself, or the crews, at risk.

The westside of Highway 242 near McKenzie River has more trees, shade and late season storms; so it is often cleared later then the east section near Sisters. At times, gates on one side or the other may be open while the other side remains closed. Do not assume you will be able to drive all the way through just because one gate is open. A turn around may be necessary at the Dee Wright Observatory midpoint.

How can I check the road status?

ODOT does not release updates for the purpose of cycling. When Highway 242 is closed by the gates to traffic, it is closed to all traffic, and travelers who use Highway 242 while it is closed do so at their own risk. Check TripCheck.com and ODOT's McKenzie Highway webpage for road status and plans. And always closely monitor the weather.

May I still ride?

If you choose to ride before the road is open, you do so at your own risk. It is considered dangerous. You may encounter tree limbs, rocks, unstable road conditions, snow and ice. The weather changes quickly and can vary dramatically, particularly in the shoulder season. Cyclists riding while crews are on the roads are a hazard. Each year there are near misses between work equipment and cyclists. Do not ride when crews are working, typically Monday through Friday. It is also important to note that there are no services to this road during its closure and there is no cell phone service in this vicinity.

When planning a bike ride, let someone know your itinerary. Pack along emergency supplies, plenty of water, a first aid kit and bike repair kit. Work up to long rides just as you would train for a marathon. And make sure your gear is in top shape and weather versatile. And of course, don't forget to have a great time and enjoy the ride!

Oregon Route 242, known as a portion of the McKenzie Highway, is an Oregon state highway that runs from Belknap Springs, Oregon through McKenzie Pass in the Oregon Cascades, to Sisters, Oregon, in the United States. The McKenzie Highway was added to the National Register of Historic Places in February, 2011.[4]

This highway was the original routing of U.S. Route 28 through the Oregon Cascades until 1952, when it was redesignated as part of U.S. Route 126 (now Oregon Route 126). This highway was built in the 1920s and was the only highway over the Cascades going east out of Eugene until 1962, when a gravel road heading north from Belknap Springs to U.S. Route 20 at Santiam Junction was widened and paved. At that point, the new alignment was designated as US 126, and the old alignment was renamed OR 242. OR 242 is now considered primarily a scenic route. As a result, it is not plowed or sanded, and is thus closed during winter—generally from November 1 until about the July 1 every year, although snows have closed it as early as Labor Day in the past. Snow packs of up to fourteen feet are common on the summit of the road; snow gates are located 7 miles (11 km) east of the junction with OR 126 at Belknap Springs, and 8 miles (13 km) west of Sisters.

This is the 2nd highway in Oregon to have the designation OR 242. The earlier OR 242 was located in the Willamette Valley and connected U.S. Route 99E (now Oregon Route 99E) in Woodburn with Oregon Route 219 southeast of St. Paul. This incarnation of OR 242 existed between 1932 and sometime after 1951, when it was replaced with an extended Oregon Route 214. Later, OR 219 was redirected along most of this route to end on Interstate Route 5 in Woodburn, and OR 214 was truncated to the same interchange.

What is now OR 242 was a wagon route over the Cascade Range. It was built in 1862. The highway for automobiles was constructed in 1924.[5] In the original plan for the U.S. Numbered Highway plan on November 11, 1926, U.S. Route 28 (US 28) was designated from Florence to Ontario.[6][7] US 28 followed the alignment of OR 242.[7][8] The American Association of State Highway Officials approved to change US 28 between Eugene and Prineville to US 126 in 1952.[9] In 1962, the Clear Lake Cutoff was completed. The completion resulted in US 126 being rerouted from McKenzie Pass to the cutoff. The rerouting included a concurrency with US 20. After the rerouting, the OR 242 designation was formed on the McKenzie Pass route.[2] In February 2011, OR 242 was added to the National Register of Historic Places.[5] In September 2011, McKenzie Pass was designated as an Oregon Scenic Bikeway