The new ’53 Chevrolets promised NEW features and Improvements everywhere. Touted as one of the greatest advancements ever presented by Chevrolet, the new ’53 boasted to be stronger and the mightiest most powerful yet built with the new Fisher Unisteel construction, high-compression engine, and rear axle. Other impressive features such as key-turn starting, added shoulder level width (both front and rear), New Foot-Form brake pedal, and a One piece curved windshield just to list a few. The all new 150, 210 and Bel Air series were greeted with much enthusiasm and deemed the "Hot Ones”.

When initially looking at this 1953 Chevy 150, it almost appears factory but it is far from it! This car comes from a 1 family garage with many memories made in it over the years. In the late 1990s, it was completely torn down to bare metal and custom fabricated by Dave Bovill of Omaha, Nebraska. The fit and finish of the custom work is outstanding and you wouldn't even know it was custom unless you are very familiar with 1953 Chevrolets. The flared fenders, rear quarter panels, soft top and custom front and rear bumpers with the continental kit are the most obvious changes. You can tell this body was carefully crafted by an artist as it is extremely straight and all door gaps line up nicely. The soft top and custom pin stripping set this Chevy apart from the rest in a unique way. The interior is done nicely with new seat upholstery and carpet. The dash finish is great and matches the Electric blue body paint perfectly. Factory speedometer and gauges with an added VDO coolant temp gauge. Not only do you get door popper controls on the key remote, but also underneath the gas cap are three buttons, one for each door and one for the trunk. The I6 and TH350 combo is buttery smooth when cruising around town and is a very reliable setup. Overall this 1953 Chevrolet is a beautiful, well done custom build that will turn heads and start conversations anywhere you take it.

Disclaimer: Cars Remember When Auto Sales offers the details of the vehicle in good faith but cannot guarantee the accuracy of the information nor warrant the condition of the vehicle. It is the buyer’s responsibility to verify the vehicle, look at the provided photographs/videos, ask questions, inspect, or preferably get a 3rd party opinion on the vehicle. All cars sold ‘as-is’ unless specifically stated otherwise. Prices do not include government fees and taxes, any finance charges, any electronic filing charge and any emission testing charge. Advertised pricing does include Dealer Handling charges. We update our website inventory frequently, but our inventory changes with recent sales. Mileage is read from the odometer, can not be proven unless stated otherwise.

© Certain automotive content displayed within this website, Copyright DataOne Software and are protected under the United States and international copyright law. Any unauthorized use, reproduction, distribution, recording or modification of this content is strictly prohibited.
Sours: https://www.carsrememberwhen.com
Your Neighbour's Crazy 1953 Chevy Belair (El CHICANO)

Copyright. Under the Copyright, Designs and Patents Act 1988, the content, organization, graphics, design, compilation, magnetic translation, digital conversion and other matters related to the automobile-catalog.com site (including ProfessCars™ and automobile-catalog.com™) are protected under applicable copyrights, trademarks and other proprietary (including but not limited to intellectual property) rights. The automobile-catalog.com website is only for the on-line view using the internet browser. The commercial copying, redistribution, use or publication by you of any such matters or any part of this site is strictly prohibited. You do not acquire ownership rights to any content, document or other materials viewed through the site. Reproduction of part or all of the contents of this web-site in any form is prohibited and may not be recopied and shared with a third party. The incorporation of material or any part of it in any other web-site, electronic retrieval system, publication or any other work (whether hard copy, electronic or otherwise), also the storage of any part of this site on optical, digital or/and electronic media is strictly prohibited. Except as expressly authorized by automobile-catalog.com, you agree not to copy, modify, rent, lease, loan, sell, assign, distribute, perform, display, license, reverse engineer or create derivative works based on the Site or any Content available through the Site. Violations of copyright will be prosecuted under the fullest extent of the law.
The full Terms and Conditions of using this website and database can be found.

The Chevrolet One-Fifty (or 150) was the economy/fleet model of the Chevrolet car from 1953 to 1957.[1] It took its name by shortening the production series number (1500) by one digit in order to capitalize on the numerical auto name trend of the 1950s. The numerical designation "150" was also sporadically used in company literature. It replaced the Styleline Special model available in previous years. This model was dropped following the 1957 model year and replaced by the Delray.

The One-Fifty was mainly conceived as a fleet model and little effort was spent marketing it to the average car buyer of the day, although sales weren't limited to fleets. It was most popular with police, state governments, small businesses, economy-minded consumers and hot rodders. Chevrolet sold substantially fewer One-Fifties than Two-Tens or the Chevrolet Bel Air in every year of its life.

True to Chevrolet's vision, the 150 was no-frills basic transportation. It had limited options, stark trim, solid colors, plain heavy duty upholstery and rubberized flooring.[2] Small things like ashtrays, cigarette lighters and even mirrors were extra cost options. Compared to the mid-level Two-Ten or premium Bel Air models, the One-Fifty was stark and bland. 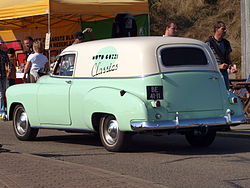 The Chevrolet Sedan Delivery, was part of the One-Fifty line, and was also designated the 1508 in the truck line.

Body style choices were also limited to sedans, Handyman wagons (four-door in 1953–1954, two-door in 1955–1957) and (until 1955) the club coupe. The only body styles specific to the One-Fifty were decidedly fleet oriented — the sedan delivery (a 2-door wagon without rear windows and the rear seat removed) and the business sedan — a 2-door sedan with immobile rear windows and back seat removed. Powertrain choices were limited to manual transmissions and low output engines until 1954. In 1957, a full race-ready version was also available, commonly known as the "Black Widow" for its black-and-white paint color. It was equipped with 4-wheel heavy-duty brakes, 6-lug wheels and dual shock absorbers.

This was the first year for both the One-Fifty and Two-Ten. The two model years were essentially the same, except that the business coupe (short roof) became the Utility Sedan (with a 2-door sedan body) for 1954. The 150 came only with the base engine in 1953.[3] The 150 came with a horn button, rather than the 210 and upscale Bel Air's horn ring.[4]

Three engines were used in the 1953–1954 model years, although not all were available at the same time. All One-Fifties in 1953 used a 3-speed Synchromesh manual transmission. Starting in 1954, Powerglide automatic transmission was available on this series.

The 1955 model year marked the introduction of a new chassis, all new streamlined single bow bodywork, and the debut of Chevrolet's Small Block V8. The One-Fifty buyer was free to choose any powertrain option available. The business sedan was renamed the utility sedan this year. Unlike the 210 and the Bel Air, the 150 did not have any of the stainless steel trim.[3]

Engine choices remained the same, except for higher power ratings. The 265 in3 V8 was available in three different versions. The I6 had a new unified build regardless of transmission type.